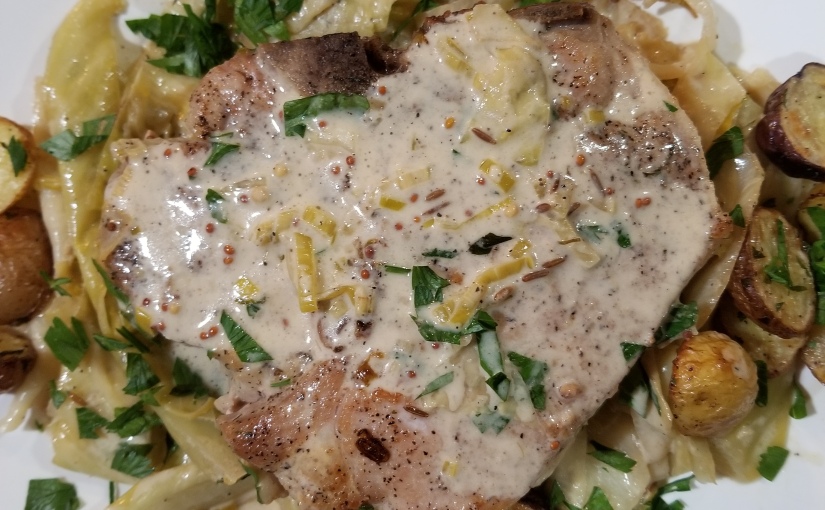 My friend, Kami, is one of the only people from college that I still stay in touch with. She and I have a sort of cosmic mental connection, meaning I can say something extremely vague and she’ll still know exactly what I’m talking about.

She very recently sent me a text message with the picture of a recipe that looked like it was in a newspaper. I looked it up and it was from the Boston Glob. (Here’s the link to the newspaper article/recipe.) She also sent me a photo of her real life and successful attempt at the recipe. Wow, did it look delicious! I hope she doesn’t mind (and if we are channeling that cosmic connection, then I don’t think she will), here’s her photo below.

She sent me the recipe because she thought it’s something I’d be interested in as a nice fall transition recipe. 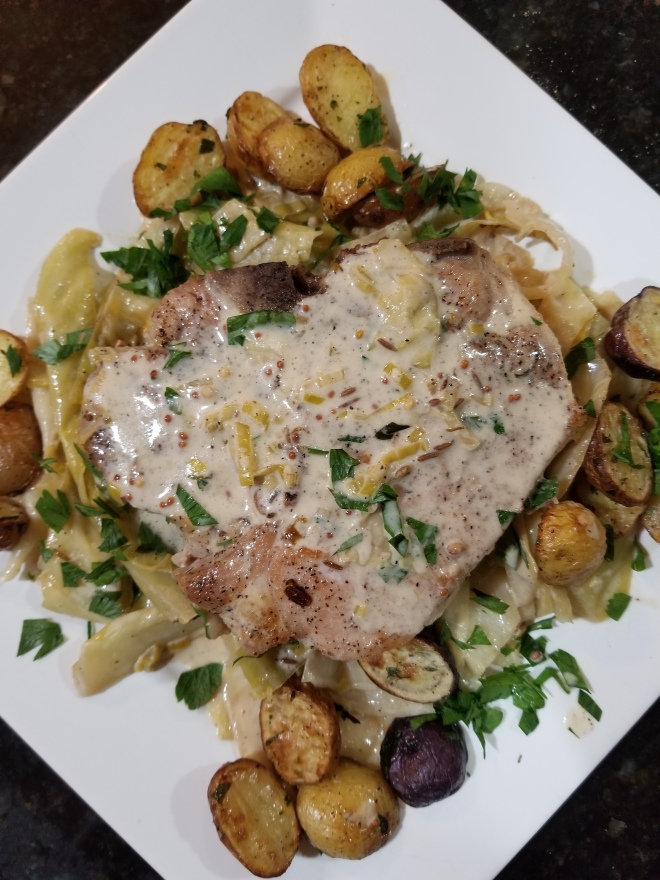 So, here comes the next part…Jake and I were at the grocery store today. I hadn’t previously mentioned this recipe to him and he literally said to me, “Do you want to get bone-in pork chops?” Heck, yes! I immediately pulled up the image of the recipe and scrambled around to get all the ingredients we needed.

Kami was also nice enough to tell me some of the things that she thought weren’t great or that she would do differently next time, so I was able to incorporate those.

First, she mentioned that the pork chops weren’t as juicy as she would like. I interpreted this as they were a little dry or overcooked. When I told Jake about this recipe, he had immediately asked if it called for the pork chops to be brined (as he normally likes to do). I originally intended not to brine the pork chops because the recipe didn’t say to do so, but after thinking about Kami’s comment, I decided to do this. I used 2 cups of water and 1/4 cup of salt. I also added a tiny bit of the sliced leaks, parsley, garlic powder, and pickling spices. I think all that’s really needed for a basic brine is just the water and salt. I did this for the minimum of 30 minutes.

Second, Kami mentioned that she wished she had some buttered noodles or potatoes on the side. Based on what I saw of the recipe, I could definitely see this. All the recipe really has is the meat, vegetables, and sauce. Some sort of starch would complement it nicely. We happened to have bought little potatoes at the grocery store, so I halved them and air fried them with a little bit of oil, salt, pepper, and fresh parsley.

Lastly, Kami didn’t mention this, but when I mixed the heavy cream, grainy mustard, and dijon mustard, I thought that the amount of mustard was a little small. So, I squirted extra of both kinds of mustard into the mix. This was more of my own preference because I like that mustard-y taste.

Here are some photos of the cooking process.

This was a really great and hearty dish. Unlike usual, I couldn’t finish my meal! (That’s a first! 🙂 ) If I make this again, I’d reduce the cream and perhaps even use light cream instead of heavy cream. I would definitely put this on the list to make again, though. If you’re looking for an impressive dish for a special occasion, this is it.

Thanks, Kami, for sharing!