This was soooooo good! I made this meal once before, but I changed it up a little this time. I used a recipe from Pinterest (surprise, surprise) as my basis. (Here’s the link to the recipe.) The results were delicious. It was really filling, but I was still craving more.

The recipe calls for two heads of cauliflower. I had one large head, which was more than sufficient for Jake and I who like to eat a lot. First, I cut up the large head of cauliflower and cut off/discarded any really large pieces of the stem. Feel free to keep them if you like, but I wanted to make sure I had enough room filling the pitas to use all the florets.

The recipe also calls for 2 cans of chickpeas. I only used one – drained and rinsed. I put the drained chickpeas on a paper towel, took another paper towel and patted them down, then rubbed my hands around a bit over the towel and chickpeas. This is so I could dry them a bit and also loosen some of the clear shells around them. I picked those away and discarded them. (Don’t go crazy doing this – you could be there forever and drive yourself nuts trying to peel them all away.)

I decided to add a few chopped mushrooms, as well.

With all that in a large bowl, I drizzled some olive oil and added the seasonings. I mixed it around and did a little taste test. I ended up adding some more Garam Masala. I actually also decided to add some cumin and turmeric.

I spread the filling out on two large baking sheets so there wasn’t too much overlapping and put them in the oven. I would suggest the middle rack. The recipe calls for the oven at 425 degrees Fahrenheit, but I found that to be too hot – I was getting more of some burnt pieces than browned pieces (and my sensitive smoke detector went off, ugh), so I turned the oven down to 400 degrees Farenheit.

Jake wanted some shrimp, so I planned for two shrimp per pita. I seasoned them with salt, pepper, garlic powder, and paprika. I then cooked them on the stove with a little butter.

The Pinterest recipe includes directions on how to make an avocado cilantro lime dip. I didn’t feel like going through the trouble of all that, so I made a modified version. It was just one avocado smashed with some plain Greek yogurt, salt, pepper, lime juice, and some thinly sliced red onion.

The other spread was a carrot sriracha hummus that I bought at our local grocery store. The brand name on the hummus is Lantana.

I also just bought pita from our local store. The brand is Joseph’s – it is a Flax, Oat Bran, and Whole Wheat pita and only 50 calories per pita! These were the smaller kind – only about 5″ in diameter or so. Feel free to use whatever pita you want, though – most kinds should work great. 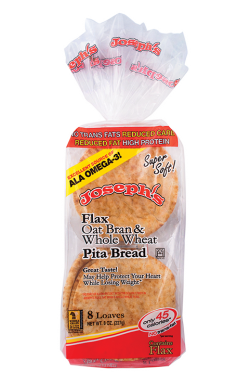 I assembled all of the pitas ahead of time, mostly to get a good photo!  Otherwise, I would’ve served it tacos or a fajita style so that we could create our own custom pitas with all the fixings. In the end, this was really good and really filling. Although I wanted more of this, I didn’t even want snacks after dinner, like I usually do! 😉