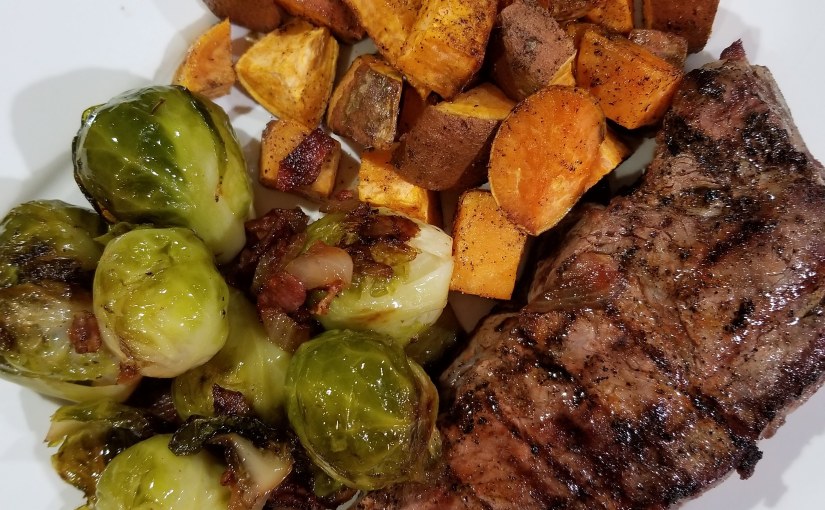 Yesterday was my birthday! Ah, how time flies. Everything leading up until that night’s dinner really didn’t feel any different. It fell in the middle of the week – I worked a full day, didn’t mention it to anyone at work, and we hadn’t really made any plans. On my way home, I called Jake like I normally do. Come to find out, he had left work early and was in the middle of cooking me a birthday dinner! Not only that, but he had taken some photos for me along the way, knowing that I would want to blog about it. Am I that predictable?! Look below at what a great job he did!

Wine is a staple in my diet, so the night before my birthday, Jake stopped by the local wine shop and purchased four bottles of wine. Yay! He chose one of the red wines to enjoy with the birthday dinner last night.

On my birthday, Jake had timed his cooking so that when I got home I had just enough time to shower and get into my sweats (the perfect birthday outfit) before he finished the appetizer. He made breaded air-fried shrimp with a dipping sauce. 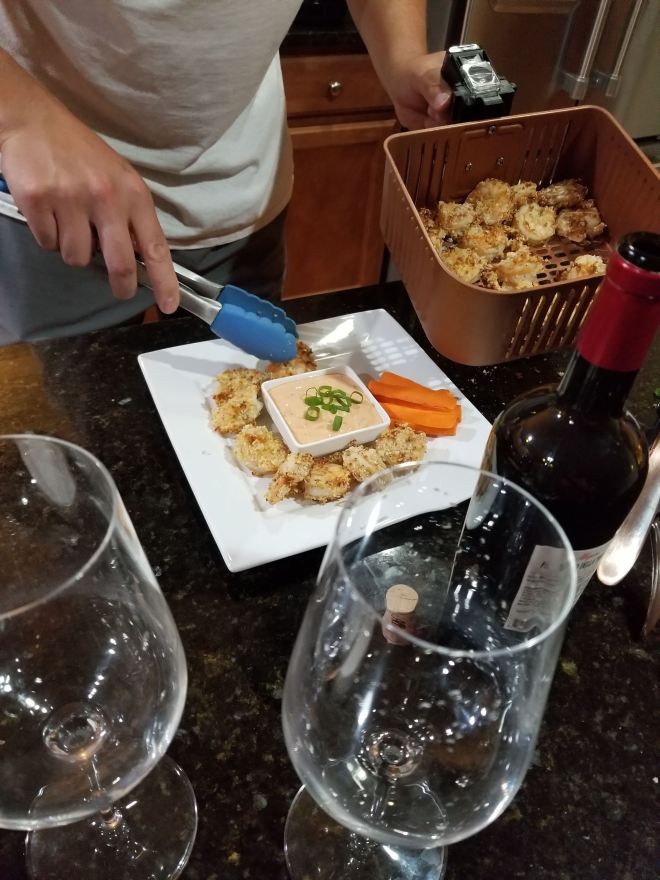 To make the shrimp appetizer, he tossed raw shrimp in a “secret” seasoning blend, coated the shrimp in egg whites, and tossed them with Italian Style breadcrumbs. He then air-fried the shrimp until the breadcrumbs were a golden brown. For the sauce, he mixed together Greek yogurt, sweet Thai chili sauce, and sriracha. Then, he garnished the dip with green onions. The dip had a really unique flavor and it paired perfectly with the shrimp.

For the protein in the main meal, he made steak. The steaks were simply seasoned with a Hawaiian Alaea (pink) salt, pepper, and paprika. If you want to do that yourself and don’t have the Alaea salt, don’t worry about it – just use any salt you have in your spice cabinet. He grilled the steaks and then let them rest so the juices would “‘re-absorb” into the steaks.

On the side, Jake made oven-roasted sweet potatoes and sauteed brussel sprouts. The sweet potatoes were cubed and seasoned with salt, pepper, and a dash of cinnamon to help bring out some of the sweetness. He roasted them in the oven at 360 degrees Fahrenheit for about 15 minutes.

The brussel sprouts were divine. First, he cooked up maple bacon in a pot on the stove top. Once crisp, he removed the bacon, and added some sliced sweet onion. He cooked those down a bit to soften them. He then added the whole brussel sprouts and added salt, pepper, and sugar. He let that cook on the stove, covered, for about 15 minutes. This gave enough time for the greens to cook and to caramelize the onions. They got that deep brown color and mouth-watering sweet/savory flavor. I’m drooling right now thinking about it! As the last step, Jake crumbled the cooked bacon over the brussel sprouts and tossed to mix.

I ate a lot of food last night and I refuse to feel guilty about it! Not only was it my birthday, but there’s no way I was leaving any part of my dish untouched. It was just too good.

To top it off, we had dessert. Jake opted to buy the dessert this time instead of baking since he was already going to have his hands full cooking. He knows I’m not a big sweets lover, so he got me two mini fruit tarts. (He got himself a chocolate cupcake with a mint chocolate chip frosting.) Perfect. 🙂 It was the perfect kind of birthday; it was a food-i-licious, no frills, yoga pants, wine drinking, and binge TV watching night with my thoughtful husband.

Just wait until his birthday in June and you’ll learn about why I’m obligated to make him lobster mac and cheese. 😉