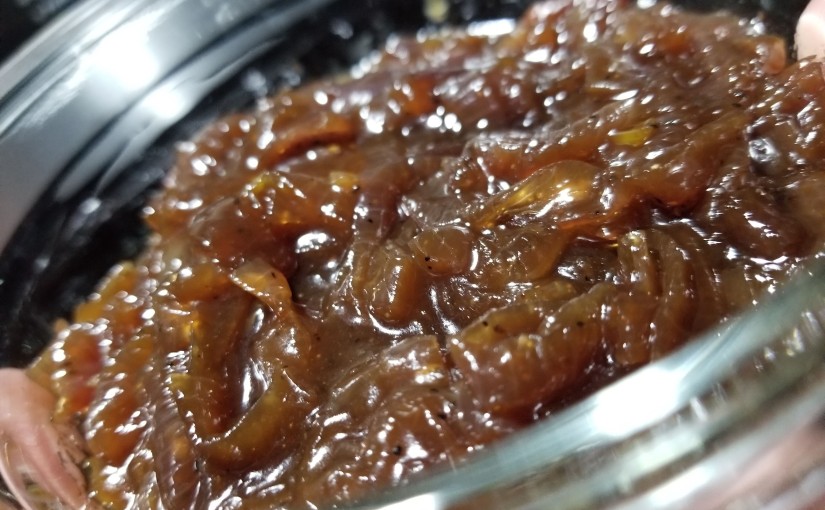 We went to BJ’s Wholesale Club Labor Day weekend to pick up a rack of ribs for smoking. While we were there, I decided to pick up some red onion to add to a quinoa salad. Of course, we were forced to buy the 3 lb bag of red onions, when all I really needed was one. So, we used a few red onions here and there the past few weeks, but we still had quite a bit left. I originally thought I would make pickled red onions with the left overs because I love anything pickled. But as I was searching Pinterest, I came across a red onion marmalade recipe. (Here’s the link to the recipe.) I decided to make this because it looked more versatile – I could potentially use the marmalade to complement more types of dishes.

At first, I thought it look very much like caramelized onion, but it truly is more like a marmalade – much sweeter and stickier than caramelized onion. That threw me off at first; I thought maybe I used too much brown sugar or butter, but it’s meant to be that way. In the end, I think I may have still reduced the sugar and butter by just a little bit or added more red onion to suit my taste buds. 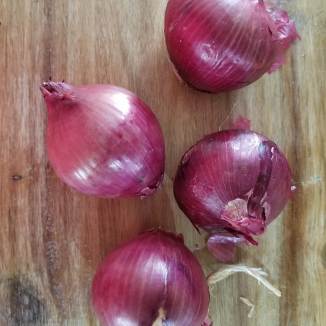 I left the stove on medium/low heat just so the mixture was constantly on a “low bubble”.  It took about 30 minutes for me to cook this down until the onions were tender and dark and the mixture was super sticky (not a lot left to reduce down). I then added the red wine vinegar a little bit at a time, cooked it down, then added more, etc. until the red wine vinegar was used up. This took about another 10 minutes.

We had some steak in the refrigerator that needed to be eaten that night, so Jake fired up the grill and we enjoyed the marmalade as a topping. Jake really liked it, I think particularly because he has a sweet tooth. I have to admit, it did pair nicely with the savory steak. On the side, we had air fried kale and mushrooms. I also made roasted potatoes with garlic and green onion.

I think this might also go really well with the traditional piece of toast or can even be used as part of a marinade, incorporated into salad dressing, or used as a puff pastry appetizer topping! Yum!

I hope to see some comments about successful marmalades you’ve made and what you like to eat them with!